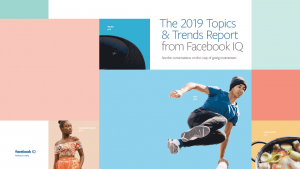 Facebook just released their second annual Topics and Trends Report.  This is their report for marketers that tracks conversation topics that consumers are sharing on the platform, that are growing louder.  If you’re in the food industry, this is seriously fun eavesdropping! It can help us spot real trends.  Overheard social media conversations indicate that concern about food’s healthfulness and interest in multicultural foods are on the rise.

Facebook IQ found a more than seven-fold increase in mentions of calabaza, a West Indian pumpkin. Mentions of caldo de pollo, or Mexican chicken soup, increased 9.6 times and references to tiropita, a Greek egg-and-cheese dish, increased 1.5 times during the observation period, which was from January 2017 to October 2018.

The previous year’s report revealed a growing interest in chicken feet; but that trend hasn’t taken off yet in mainstream restaurants.  Yeah, I haven’t tried them yet either!

“Focused on flavor, people are working to make healthy foods taste as good as classic favorites, replacing elements of traditional cuisines with health-conscious alternatives,” the report noted. “Among the cuisines being revamped on a grand scale, soul food is getting some major attention from healthy eaters working to emulate rich, soul-warming dishes.”

Other flavors getting increased mentions included turmeric, kimchi and eucalyptus.

Bread Made an Appearance

And bread was getting new interest.  Including increased mentions of alternative flours like rice flour and ancient grains, such as einkorn wheat. Conversations about einkorn increased 2.6 times last year, for example.  (insert link)

And interest in baking and bread crust were on the rise.

And there you have it; some fun, timely and potentially useful data, free, courtesy of Facebook